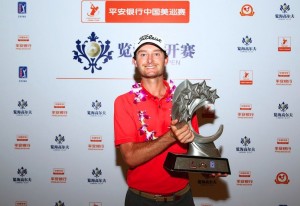 PGA Tour Professional, Rohan Blizard, Won for the first time on the PGA of China Tour.

Rohan took a one shot lead after 54 holes. Poor weather prevented the event to be completed over 72 holes. Rohan was declared the winner as he was the leader after 54 holes.

Shooting 70, 67, 69 was strong in tough conditions to win the Lanhai Open in China.

Rohan started the third round with a bogey, but fought back with 5 birdies, 2 of which were on the 16th and 17th holes.

Par on the 54th hole essentially gave Rohan the win as his playing partner had a bogey, which put Rohan into the outright lead.

Rohan has been working on hard on his game. In 2015, Rohan had many opportunities to win, but luck was not not his side.

Finishing 7th on the Order of Merit in 2015, Rohan has set his sight for a top 5 finish.

This has now taken Rohan to 3rd on the Order of Merit.

Rohan’s goal is to have two wins…he has his first early in the season.

Rohan is a gentleman of the game. His discipline and never give up attitude is a characteristic that is admired by many around him.

Congratulations to Rohan on the great Win!

Keep up the good work!

I look forward to seeing you soon.